Celebrating the Women of the MVYMCA: Claudia Soo Hoo

I have worked for the Merrimack Valley YMCA since 2001. I started off in a seasonal role as a Camp Counselor for several summers. In 2006, I took my first full-time role as the Aquatics Director at the Lawrence YMCA and have had several other roles in the organization including Senior Director of Youth and Teen Services, Executive Director of the Camping Services Branch, District Executive Director, Senior Executive Director, and currently Chief Operating Officer. 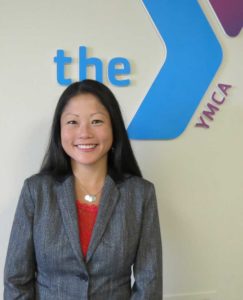 My experience as a woman in the YMCA movement has been positive. At the Merrimack Valley YMCA our split on the overall leadership team has typically been 60/40 women to men. There have been times where the balance has shifted but in general there have been lots of female role models in the organization. I would say that throughout my career I have followed white men in my roles and for me I did have to give thought about how I show up. It took me time to realize that doing things differently is okay.

I don’t know that I have one top female role model but I look up to women who are trailblazers, equity champions, and empowered. I think in order for our country to find gender equity we need empowered women to empower women. This doesn’t always happen.

I don’t necessarily think there is one set of qualities that make a person a great leader.  If I had to list my top five, I’d say integrity, confidence, self-awareness, communication and empathy.

I think as a woman the expectations and assessment are different than for a man. For example, personal situations come into play when thinking about capacity. “I don’t know if she can handle this role, she has small children.” I can guarantee they are not questioning that about my husband at his company. Right or wrong, I have almost never made my kids an obstacle to a meeting, an event, or my work. On the flip side, I do take advantage of flexibility with my family and job. I also think that there is a fine line between being too aggressive and too passive and that is not a line that men typically need to fight.

Understand and be your authentic self. Learn to advocate for yourself. Be a lifelong learner. Align your passion with what you do.

I never realized until recently that I am the first woman COO at the Merrimack Valley YMCA. I believe I was also the first female Executive Director of the Camping Services Branch. While I may have been the first a couple of times, I know that I won’t be the last.

Is there anything we didn’t ask that you would like to add?

As I reflect on my experiences as a woman, for me the concept of intersectionality is also important for me. I identify as an Asian American female, who was adopted from South Korea as a toddler.  Throughout my life I have heard microaggressions, which I think often stem from people’s unconscious bias. One example that I have heard is – “you have such a big job for a little person.”  I never know if it is because I am Asian, I am female, I am small in stature, or I am “young.”  While the same comment may be made to others, it is important to think about where identities intersect.