Kelly Lennon, a distance swimmer who started her career swimming with the ANA YMCA Hurricanes swim team, has been nominated for an NCAA Woman of the Year award. This award honors graduating female college athletes who have distinguished themselves in academics, athletics, service and leadership throughout their collegiate careers. The winner will be chosen this fall. 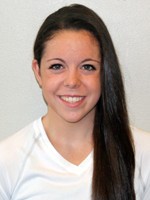 22-year old Lennon, a Methuen native, recently graduated from the University of Vermont (UVM), where she was on the Varsity Swim and Dive Team. A distance swimmer for the Division I school, she competed in the 200, 500, and 1650 for championships and the 1000 during the season. She also swam the 100 freestyle during her junior and senior seasons and was on the 400 freestyle relay for championship meets.

Lennon graduated from UVM with a double major in English and Psychology. In addition to swimming, she served as Chair of the Student-Athlete Advisory Council. Together with classmate Trae Bell-Haynes, she created the “Rally Around Mental Health” program. This program developed into the Catamount Sport Psychology & Counseling (CSPC), which is a collaborative initiative between the Department of Athletics and Center for Health & Wellbeing at UVM. Its goal is to provide improved mental health support to student athletes, coaches and programs. Lennon says she is humbled and honored to be nominated for NCAA Woman of the Year by UVM.

“Truly what it means to me is that there are people at Vermont who think the work I did, especially on our mental health initiative, is valuable and important to the athletic department,” Lennon said. “I appreciate the people who supported me over the last four years. I worked really hard, but hard work means nothing if you don’t have people along the way to push you when you are discouraged.”

Lennon swam with the ANA YMCA Hurricanes from 2007-2014 and returned to the Merrimack Valley YMCA during college as a coach. Lennon says coaching was a really good experience for her because it allowed her to give back to the program that gave so much to her.

“I loved coaching the kids. It definitely taught me a lot of patience, but also helped me take away how important it was to give back to the Y in that way,” Lennon said. “The kids all love swim team so much and I love to see the excitement they have because I had that same excitement for the sport at their age. Being able to be a part of fostering it in them and helping them grow into the sport was so fun for me.”

“Kelly swam all events, but excelled in distance and middle distance swimming,” said Reilly. “She’s not only a great athlete, but also a very interesting and well-rounded person. I’m proud to know her.”

Lennon credits Coach Reilly for pushing her to reach her potential as a swimmer and for being the kind of coach who understands the person behind the athlete.

“Being on the Hurricanes definitely helped me develop not only as a swimmer, but as a leader,” Lennon said. “I also really appreciate the friendships the Y forged for me. Four of my best friends from ANA still have a group message to this day.”

Her biggest piece of advice for young swimmers: “Try not to take yourself too seriously when you’re so young in the sport,” she said. “I think it’s important to make sure you put in the work to get to college but also make sure you’re not over-doing it. Give yourself a break sometimes! Also – if there’ s a school you want to go to, and you think there’s no way you’re going to get there, it NEVER hurts to send an email. Dream big!”

Lennon’s future plans include applying to graduate school to pursue a Masters in Sports Administration with a goal of working in college athletics. She is back home in Methuen working several jobs, including assistant coaching the swim team at Merrimack College this fall with former Hurricane coach Erin Cammann.

For more information about the NCAA Woman of the Year Awards, visit: http://www.ncaa.org/about/resources/media-center/news/ncaa-schools-announce-nominees-2018-woman-year